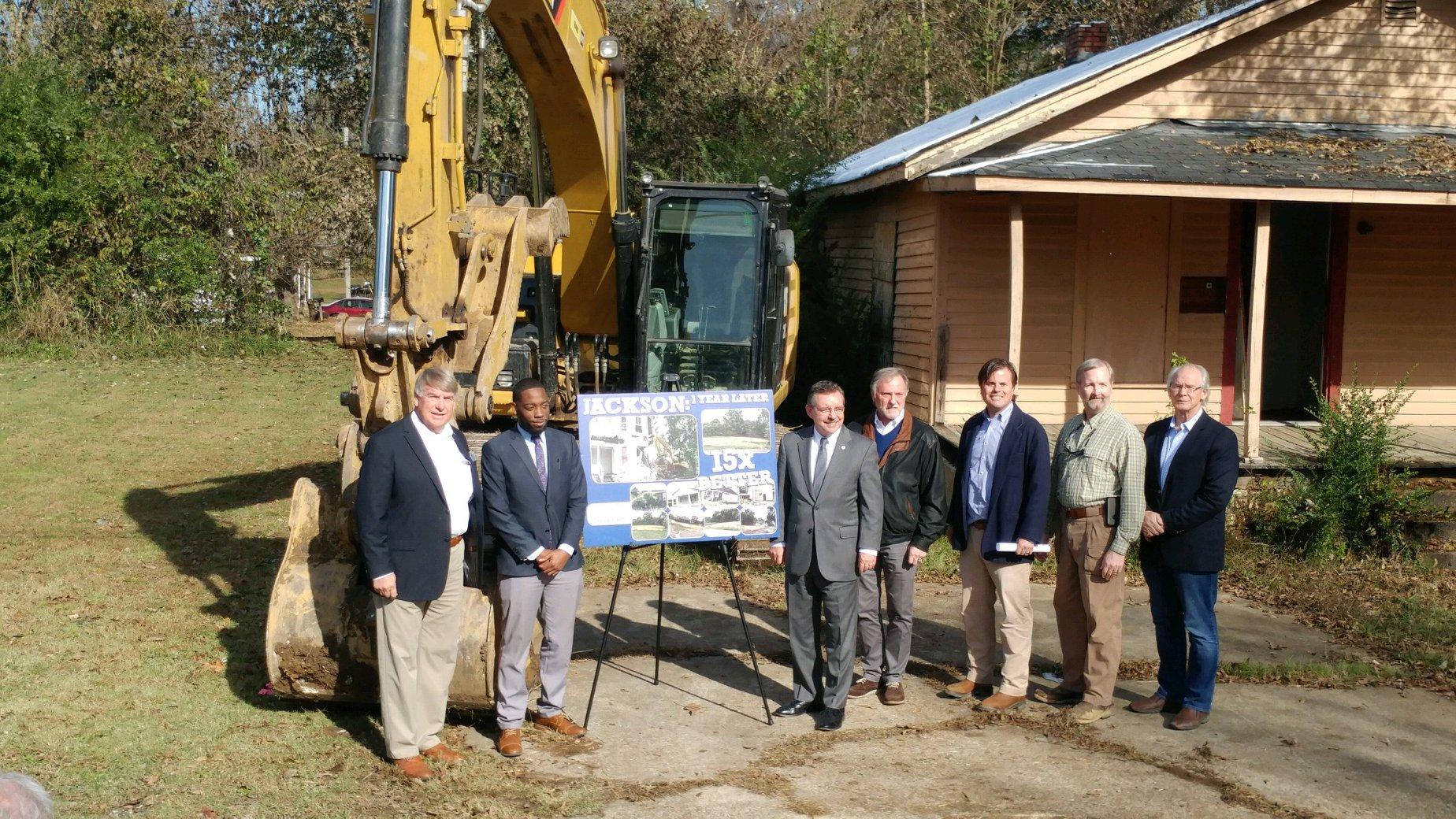 JACKSON, Tenn. (November 16, 2018) – Today, under THDA’s Blight Elimination Program, the Community Redevelopment Agency (CRA) of Jackson facilitated the demolition of the fifteenth blighted house in as many months.

County Mayor Jimmy Harris and THDA Executive Director Ralph M. Perrey were on hand at the ceremony to mark the highly successful partnership between THDA and the CRA. Today’s demolition brings the total of houses removed in Jackson to fifteen, making the city the largest user of the federal Blight Elimination Program funds in the state, outside of Shelby County.

Chris Alexander leads the Community Redevelopment Agency in Jackson, which has worked with THDA on all fifteen demolitions.

“Healthy Community and Jackson’s Community Redevelopment Agency partnership with THDA has been a great team effort. THDA is just as passionate and meticulous about improving and stabilizing neighborhoods as we are,” said Alexander. “It’s always great to work with another engaged team and we look forward to continued success on this program and other collaborative efforts in the future.”

CRA representative Brian James said they plan to submit applications to demolish an additional ten houses in Jackson, as the program has been so successful.

“At THDA we like to say that we are about the business of improving lives, including the health and stabilization of communities,” Perrey said. “We’ve built a strong, beneficial relationship with Jackson and its growing neighborhoods, and we are proud of the work happening here and appreciate the opportunity to be part of it.”

The Hardest Hit Fund Blight Elimination Program assists with the removal of blighted properties in targeted areas within the state of Tennessee. THDA works in partnership with approved non-profit agencies and land banks to strategically target residential single-family properties for demolition, site improvement, and acceptable reuse.

The BEP's purpose is to reduce foreclosures, promote neighborhood stabilization, and maintain property values through the demolition of vacant, abandoned, blighted residential structures, and subsequent greening/improvement of the remaining parcels within the targeted counties.

The Hardest Hit Fund® Program was established in February 2010 to provide targeted aid to families in states hit hard by the economic and housing market downturn.